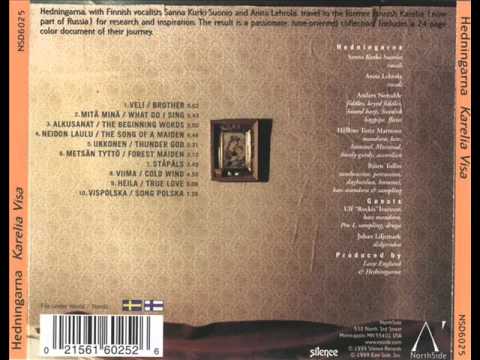 Hedningarna is a Swedish and, for some years partly Finnish, folk music band that mixes electronics and rock with elements from old Scandinavian folk music. Their music features Yoik or juoiggus, a traditional Sami form of song.
Hållbus Totte Mattson, Anders Stake and Björn Tollin formed Hedningarna in 1987. Hedning is Swedish for heathen, while arna is the plural definite article (thus ‘Hedningar’ = ‘Heathens’ and ‘Hedningarna’ = ‘The Heathens’). They wanted to go far back to the roots of the Old Norse culture, including the use of ancient instruments not much used in current Swedish folk music. Stake, a trained luthier, also began to invent and build new instruments, to produce new sounds.

In 1988 Hedningarna composed and performed a major part of the music to the stage play Den stora vreden (roughly meaning The Great Wrath) which aroused great interest. Their first album titled Hedningarna was released on Alice Records in 1989. In 1991, Hedningarna began their collaboration with Silence Records. They met the Finnish singers Sanna Kurki-Suonio and Tellu Paulasto. The album Kaksi! (Finnish for two) was released in September 1992. In 1993 Hedningarna was awarded a Swedish Grammis (the equivalent of Grammy) for The Best Folk Music Album of the year. The sales of Kaksi! reached 35 000 albums, which is very high for a folk music record in Sweden. British Sasha made a remix of Hedningarna’s Kruspolska which climbed the charts in England.

The third album Trä, meaning ‘wood’ in Swedish (a pun, since “Trä” also sounds a lot like the Swedish word for “Three”) was released in September 1994. Melody Maker wrote “it may sound alien, but yet it sounds like the most essential music on the earth.” Hedningarna performed at the Roskilde Festival in the presence of 20 000 people on the second largest stage. In 1995 Hedningarna toured Scandinavia and abroad. A compilation album with songs from Trä and Kaksi! was released in the U.S. By 1995, their albums had been released in Spain, the Netherlands, Belgium, Poland, Thailand, Great Britain and the U.S.

The singers Kurki-Suonio and Paulasto stayed at home in Finland during 1996 for child birth and their studies. Paulasto decided to leave the band, and she was replaced by Anita Lehtola, who had been in the same class as Paulasto at The Sibelius Academy in Helsinki. Mattson, Stake and Tollin began work on their new album Hippjokk. Rock bassist Ulf Ivarsson played the new bass mandora built by Mattson. Finnish Sami yoik singer Wimme Saari participated with his singing and famous Norwegian guitarist Knut Reiersrud had also a role in the album. Johan Liljemark played the didgeridoo, which he had learned in Australia while living among the Aboriginals. Hippjokk was released in February 1997. The band made tours and festival gigs with the singers in Spain and Belgium, and Ulf “Rockis” Ivarsson became a member of Hedningarna. Anders Stake changed his name to Anders Norudde.

During the winter of 1998 Hedningarna travelled to Karelia, Russia to gather inspiration for their new album, Karelia Visa. It was recorded during the spring and summer the same year. A short tour around Spain took place that summer. Ulf Ivarsson left the group after the recordings were finished. Mattson and Tollin together with the violin player Ola Bäckström recorded a CD with music for the dance troupe Virvla. It was released at Silence records in 1999. Sanna Kurki-Suonio released a solo album in Finland the same year. Karelia Visa was released in 1999, and it was followed by concerts in Scandinavia and a three week tour in the USA.

Hedningarna played live to a dance performance based on their music, made and performed by Flying Foot Forum in Minneapolis, USA. The violin player Magnus Stinnerbom joined the group. In 2000, Norudde released a solo album and the percussionist Christian Svensson joined the group, replacing founding member Björn Tollin. The compilation CD 1989-2003 was released in 2003. By then, Hedningarna had sold about 150,000 records. The singers left the group in 2003, and since then the group has again been an instrumental ensemble. As of 2009 the band announed on their homepage, that they were working on material for a new studio album.